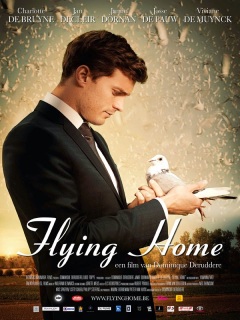 To capitalize on the success of the film 50 Shades of Grey,  “Racing Hearts” has been released on video. I think this was previously released all over Europe with the title of “Flying Home”  and I am guessing the title was changed because the new one would seem more romantic. What’s in a title? Funny how a change in it can alter the perception of a film. The movie, starring Jamie Dornan, is really less a romantic comedy and more one about pigeons. Yes, you heard me right – pigeons. The story may seem convoluted, but it is about an acquisition of a pigeon orchestrated by Dornan so he could land a billion dollar account for his firm. And yes, it was fascinating, who would have thought? It gave me an insight into that pigeon race of sending them off from Barcelona and tracking which one flies home the quickest. Dornan is a presence, for sure, and I didn’t think he was too bad here – he is very muted, for sure, but you cannot stop looking at him, and that is more than enough. He is definitely a movie star. The side romantic story line seems like an afterthought – they don’t have chemistry and I didn’t care at all.