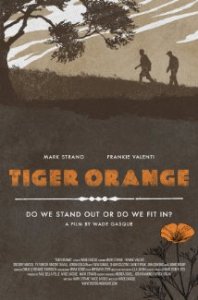 A lot of the press release and reviews I have read for “Tiger Orange” mention the fact that this film features Frank Valenti’s acting debut. Why is this always brought up? Valenti is also known as the gay porn star Johnny Hazard. Does he have the acting chops? Yes he does, and has the screen presence and charisma. Much like Sean Paul Lockhart (Brent Corrigan) I think successful porn stars nowadays can cross over and bring their talents to more mainstream fare. But it would be unfair for the movie to just talk about Valenti, and I started with that to get it out of the way. This is a very good effort from first time director Wade Gasque. Actually, I will even go further and say that this is a fantastic small film, because it has that one thing that is most important: honesty.  There isn’t an inauthentic moment here – this movie tells a story of two brothers. Yes, they are gay brothers but that is almost a non-issue here for the screenplay goes to the heart and pain of siblings and families: of resentment, of martyrs, of the ones who go away and those who are left behind. Mark Strano, who co-wrote the film, is the anchor of the film – his subtlety here is effective and the perfect counterpart to Valenti’s more showy role – and it is easy to see why  he was awarded a Grand Jury Acting Award from Outfest from this performance. I hope this film gets more attention for people. This is not a film with a big budget but everyone here makes it work.