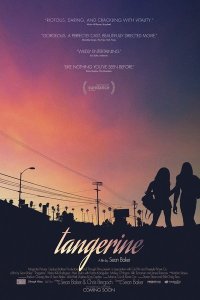 Trans people should be Time Magazine’s Person Of The Year. They have finally hit mainstream this year, starting with “I Am Cait,” then on to various think piece stories, and now, “Tangerine,” which became a minor hit this summer. This is one of those small movies that couldn’t, and maybe wouldn’t have, but kind of did. It stars two trans women playing two trans prostitute women in the streets of Los Angeles. Sin-Dee Rella (Kitana Kiki Rodriguez) just got out of a twenty eight day jail sentence, and in the opening, she is told by her friend Alexandra (Mya Taylor) that the word on the street is that her boyfriend Chester has shacked up with a white biological female. So she sets to look for this girl (her only clue is that the name of the girl starts with a D) and we kind of go on this madcap chase. There is a parallel story about an Armenian cab driver, Razmik (Karren Karagulian) who is a tranny chaser. And all of their story lines come to a head on this Christmas Eve evening. This is one of those movies wherein you just start watching and you think, this is all so surreal. But such is real life. The big “gimmick” of this movie is that it was shot on an iPhone, and director Sean Baker saturized all the colors giving the visuals an exaggerated feel. (It kinda looks like those digital photographs that are so saturated the photographers think they are such vivid photographs but really the pictures just look so fake) Baker wanted to make the characters “larger than life”  Match that with Rodriguez and Taylor’s large performances, and you get characters that more than fill the screen.