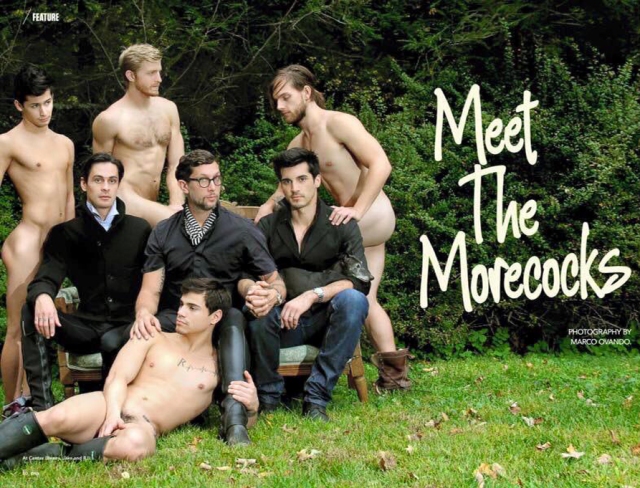 I will not pretend and say that I am unfamiliar with the catalog of Cockyboys. Of course, I have, um, enjoyed a lot of their offerings, and I freely admit I have a crush on one of their (ex?) stars, Levi Michaels. SO I was curious, okay – excited, that they have today released a docu series, called “Meet The Morecocks,” which is an exploration of the real-life throuple (Jake, Adrian, and Benny) who own and operate the site. They have already been featured in a New York Magazine article, but this gives the chance to show their relationship in vivid three dimensional color.

Too bad Episode 1, “Lightning In A Bottle”  doesn’t really focus that much on that interesting angle – it would have been the perfect opportunity for people to see how natural and wholesome a throuple can be (as described on that New York Magazine article, anyway)  We do get a glimpse about the characters, though: Adrian talks about a summer fling he has when he was in London, Benny describes how yoga and meditation helps him when he gets stressed.

What this episode focuses more on the relationship between Jake Jaxson and Max Ryder, who in this episode has started to transition away from porn. They all embark on a three European city tour, and this episode focuses on the sometime dramatic dynamics they have on the tour, culminating on Ryder’s departure from the site. I understand why they did this: Jaxson and Ryder have combustive screen chemistry, and the dichotomy of their real-life relationship is quite interesting to follow (I bet there’s a lot of professional competition between them, as most ‘teams’ do) I am guessing Ryder will not appear as much in succeeding episodes, and hopefully they will “introduce” their other models.