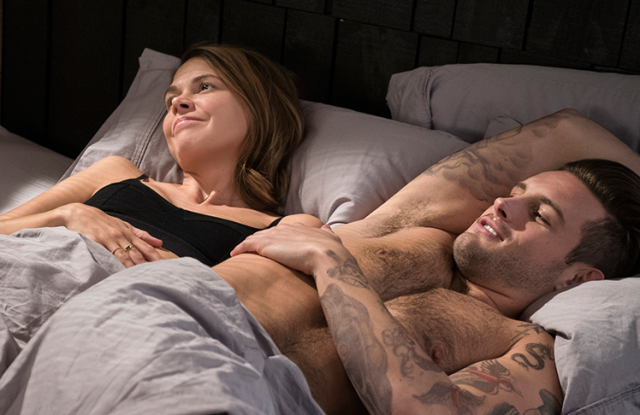 Maybe it’s the power of suggestion. Ever since I read that Nico Tortorelli (who plays Josh) is, or quite possibly be gay, I am now trying hard to see gay inflections in his acting, even though I never really noticed (or cared about it) before. And yet, there it was, at the bar scene when Liza sees her New Jersey friends and they get an invitation for dinner in New Jersey, when he answers with (my imagined) camp and all of a sudden I am now convinced that he, the actor, is gay. Though I am pretty sure his character, Josh, isn’t. Because Josh is very much into Liza, even though, yet again we go through the same plot point wherein Liza is doubting her relationship with him. And can you doubt her? He is younger, and I am sure there is a part of her that thinks this all is temporary. But Josh dismisses all her insecurities, even suggesting they be together now, as they try to make babies. Yes, in some sense we as an audience have gone through this, and in fact, some may be already be tiring of this, but all this keeps Liza up at night, I am sure. Reinforce the fact that she isn’t really in on these kids’ lingo. I mean, it speaks to my age that I had to google urban dictionary to see what truffle butter means. It’s a real feeling, this insecurity, and it makes this show more relatable for me.

Elsewhere, Kelsey is having problems getting her pages from Jade, who, it turns out (surprise) is unreliable. I have only one thing to say – thats what you get when you deal with millennials.