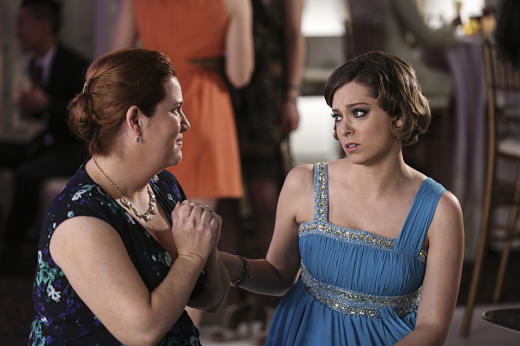 Here we are, at the end of our first season journey, and it ends as brilliantly as its season. It’s mother-effing-crazy.

We are at a wedding, and we have Lea Salonga as a guest star, as Aunt Myrna, who sings ‘One Indescribable Instant,’ a song that Rebecca used to sing as a kid from her favorite movie ‘Slumbered.’ It represents everything the princess in her fairy tale story life – the dashing prince who sweeps her off her feet, and brings her to her happily ever after. the song is a pastiche: it is like a Disney song,  but with a bit of a cliche honed in it with a wink. Salonga gives the song a whole lot of gravitas, and makes the song for the situation in the show even more perfectly.

And she has decided that prince is Greg. They have both their guards up, but Rebecca decides to hell with it – she will profess her love. But of course Greg sabotages everything because well, that’s just Greg (White Josh says this to Rebecca) and as this song plays, look at the scene above, Josh realizes it is ‘Becks’ he wants, and there is still glowing romantic montage of Josh and Rebecca FINALLY getting together. But of course, this show is more intelligent than that – the last ten seconds of teh show is pure brilliance, and ends this show perfectly.

It also solidifies Paula’s relationship with Rebecca, and Paula does this by singing a song a la Rose’s Turn, and it is, again, perfect, because of course she is teh Gypsy Rose Lee to Rebecca’s Louise. It’s been there all along….

I can say more, but as per the lyrics to this song, the onluy needed words I want to say to the show is ‘I Love You.”

(and I will see you in the Fall)

One thought on “One Indescribable Instant (Television Thoughts: Paula Needs To Get Over Josh, S01 E 18)”