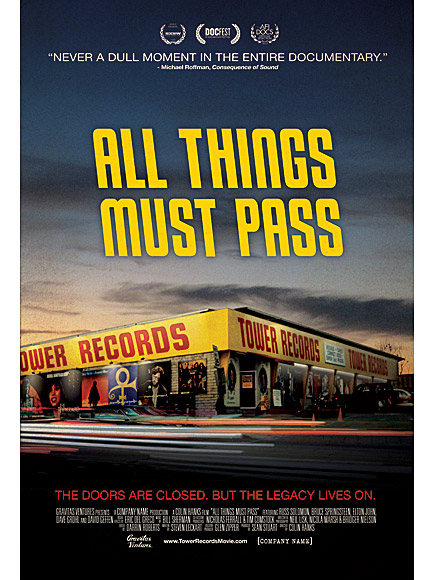 Anyone who knows me well knows that I am a big collector of music. And I was a collector of compact discs. I have thousands of them, and I still consider it my life long goal to digitalize them. I remember that I was such an obsessive CD collector that I would spend my weekends scouring through bins at various used CD stores in New York City, from East Village to Midtown. I knew all the spots – most of the people who worked at these stores knew me, and there cam a point they would put aside titles they think I would like. I was a rabid fan of jazz vocals, and you should only take a cursory glance at my music thoughts here to see I still listen to them.

So of course I would be so interested in Colin Hanks’ documentary about the rise (and demise) of Tower Records, a store that I visited so frequently I could close my eyes and still imagine every nook and cranny of two of my favorite branches – The one on Broadway and 4th, and the one on Columbus Avenue. And the documentary did not disappoint. it tells the story of the store from the very beginning – when Russ Solomon started the store as an offshoot of his father’s drugstore, and called it Tower Record Mart. And it skyrocketed to one of the biggest stores, if not the epitome of the ultimate record store. It was a billion dollar business in 1999, and the documentary points out the five years later it went bankrupt.

So what went wrong? From the looks of it, a combination of a couple of things: the company expanded too much, which put it in a lot of debt. Add to that big box stores like Best Buy and Walmart would sell discs at cost just to get traffic, something Tower couldn’t do. But the biggest factor? It did not know how to move with the times – the next generation no longer wanted to buy music, when it is freely accessed via downloading or streaming. (As much as my love my discs, I can’t help but think they are a bit of excess baggage in my life)

It’s all very sad, and the film feels like a part of my life that’s ended. i cannot help but agree with Elton John as he laments in the documentary: “When the doors closed, I feel like part of my life ended.” But, everything must change, and there’s still music in my life, only no more Tower.