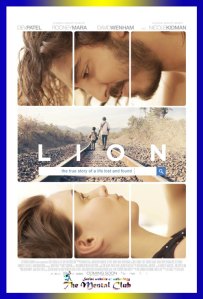 I cannot think about a better movie to write about on Christmas Day than ‘Lion,’  which has turned out to be one of my favorite movies of 2016, and quite unexpectedly, too. i don’t even think I was interested in seeing this movie, but something pushed me – perhaps my Movie Guardian Angel – and after seeing it, the film touched me so much I feel like a different person.

This is the story of Saroo (Sunny Pawaar)  a little boy who gets lost from his small town by unexpectedly boarding a train that takes him to the big city, full of strangers speaking a different dialect. The next part of the story is Dickensian – somehow he survives, and ends up at an orphanage where he is adopted by an Australian couple, forcing him to move to Tasmania. The next part finds Saroo as a young man in Melbourne, studing Hotel Management. Around this time he discovers this new thing called google Earth, and he spends days and hours scrolling, trying to see if he could find his way back to that little town – he only remembers a train station and a water tower next to it.

Dev Patel plays Saroo as that young man, and I am astonished to see him all bulked up, with sex appeals to the wazoo, as he is no longer that scrawny man from ‘Slumdog Millionaire.’  Even his acting has matured – his sensitivity more alluring, his passion more intense. he gives a great performance here.  Nicole Kidman, playing the Australian mother also gives a good performance, and I know she has gotten good notices for it.

But above all, this movie is a feel-good one, and i still cannot shake the ending and how it touched me. This is a movie with a whole lot of heart, and on Christmas Day, that’s all you need.