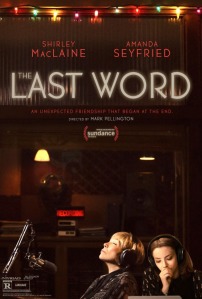 When I entered the theater showing ‘The Last Word,’ I was surprised to see that I was the one and only person in the movie theater. I got a little scared, as I don’t think that has ever happened to me before. A couple of minutes later a lesbian couple arrived, and I breathed a sigh of relief. “Are we the only ones here,” one of them asked and I said yes, “I mean, who doesn’t like Shirley McLaine,” she said after as I shook her head. “We are a dying breed,” I joked to her as a reply.

Perhaps that’s true, but the real reason probably why folks are not flocking to see the movie is because it’s just not good. It got panned by critics, and they are right – the film is a total waste of McLaine’s time, energy and talent. She tries hard to breathe life into the character of Harriett Laurer, a woman in the 80s who is an unbearable diva who hires the local obituary writer, Anne Sherman (Amanda Seyfried) to overhaul her obituary. It’s a thin premise to starts, and it never gets off the ground. Plus, the Harriett character is written so badly you cannot sympathize with her, though McLaine tries her damnedest to infuse charm, wit, and humanity. It’s a losing battle to start with. And Seyfried – she look stuck in here, like she knows she is in a bad movie, and feels trapped. Plus, she is made to look unattractive here – surely she has an actress ego to make sure she is pretty on screen? I think she met her husband, the great actor Thomas Sadoski (also a great wasted talent here) here so I guess that would be her silver lining here. I wish I could say there was one for me, the moviegoer.

And the lesbian couple? I spoke to them after the show, and they thought it was crap as well, so I am not alone.