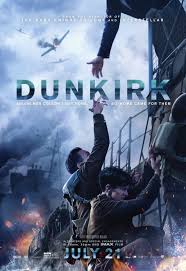 This early, there’s already major buzz about ‘Dunkirk.’ I can see why – it has very good pedigree. It’s directed by Christopher Nolan – yes, that Christopher Nolan.  The movie about the beginning of the Second World War when Allied forces were pushed to the beaches of France by the Nazis. Thousands of British soldiers are waiting to be transported back to England via air, land and sea. The film consists of three episodes woven together.

Needless to say, the action is breathtaking – the battle here is the need for survival, and not necessarily conflict. The action picks and picks up, and when the climax  comes, you will be left breathless. I wish we knew the characters better, though, and we will feel more for them.

The film’s technical is superb – the crisp editing by Lee Smith, vibrant visuals by Hoyte Van Hoyteman, and the flawless score by Hans Zimmer. And the acting is spot on – great performs by Tom Hardy, Cillian Murphy and Kenneth Branagh. Nolan has put together a film that awes, we are sure to hear this film come Oscar night.

P.S. To all Directioners, and you know who you are: Harry Styles has great presence – he has a presence of a real movie star – and for a first film Styles holds up his own, not a bad feat.