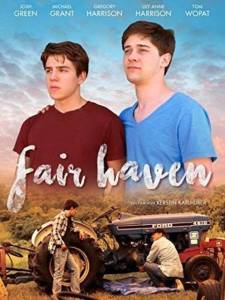 ‘Fair Haven’ got me. In my youth, I had a lot of dreams of what I want my life to be like. And some of those dreams have true, and some I still hoping for. But I am realist as well, and honest enough to say that there are dreams I had that will never true. So I can’t help to identify with the character of James, played by Michael Grant. He is 19 years old, ready to start his life.

But he had a detour. He was sent to ex-gay convertion therapy, and has pretended that he has been ‘healed.’ His father spent his tuition money (He got accepted to Berklee School of Music in Boston) and is now back in his rural Vermont town. His father wants him to abandon music and work at their apple orchard.

It’s all predictable, you may say. But Grant’s heartbreaking performance is so believable, and the directions so effective that even though we know where the film is eventually go, the journey hits every mark effectively. Sure this plays like a upgraded gay Lifetime movie of sorts, (Gregory Carradine and Tom Wopat are both here ) but such a bad thing?