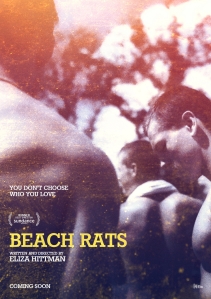 ‘Beach Rats’ is why I watch Independent Movies, because this film, directed by Eliza Hittman tells a story of someone interesting, who may not be the most sympathetic character out there, yet this person certainly makes a mark, and is someone you definitely will not forget.

Harris Dickinson plays Frankie, and in a star-making performance, and Frankie is a confused young man in a lot of ways. He spends his days with his posse looking and using drugs. His father is in a hospital bed in his house addled with cancer. He meets a young girl, and has conflicted feelings towards her. And he sleeps with men, picking them up in a hook up website. Dickinson plays all this with expertise, varied emotions playing all at once in his face.

Hittman sets all this up with vagueness- there are meanings between words, there are meanings between hos people act. We get lost in their world, and in our mind we device things to make things better for them – Frankie in one trip to the city could find the answers to all his confusion, but insists on not leaving the world he is comfortable in, yet this same comfort sets all the traps that causes all his unhappiness. In one scene, he goes home high and he tells his mom the drugs are an escape.

And as much as we get lost in their world, there’s also a desire to get out of there. Like Frankie, we feel the trap – things happen everyday, and they change, but there is no real change. Some have criticized the ending, but I love its free form, its non-answer to a lingering question.

‘Beach Rats’ stirred a lot of emotions in me – it made me despair, helpless, thankful. And Harris, with his soulful magnetic presence will be a huge star, mark my words.