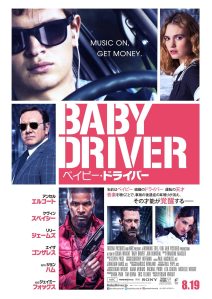 I seem to be one of the last people in the world to see ‘Baby Driver,’ and so much has been written about it by its fans. And here I am , little old me, with my opinion. I liked it – a lot. Or maybe, there’s a lot of things about I like. The car chases of course, even though normally not my thing, truly mesmerized me. How do they do those, I mean, cinematic magic at its best. Stylistically, this is probably the most impressive I have seen this year. And it is perfectly cast: Kevin Spacey, Jon Hamm, Jamie Foxx. And my dear dear Ansel Elgort, cute as ever. he really doesn’t do that much heavy lifting here, but you also can see that he has great acting instincts here – from how he cocks his sunglasses as well as the physicality required  – sometimes when he is running it looks like he is gliding.

But there is also that thing in me that wanted a story. Yes, Baby (Elgort) has a bit of a back story but really, there’s nothing here – just a bunch of bank heist scenes to make sense of all the car chases. Sometimes I ask myself – is a movie with a bad story better than one without one? But perhaps I am not the target market for this kind of film making.

Still, I have to admit that I truly enjoyed watching this film. It’s dazzling, full of color, and edited perfectly for maximum suspense. I don’t know if I will ever see it again, but then again there’s the lure of Ansel.