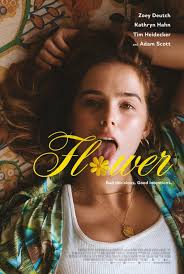 ‘Flower’ is one of those movies that I both like and hate. I like it because it is a wisecracking Indie movie, and tells a story inventively. It stars Zoe Dutch (mark my words, a star in the making) is Erica, a teenager who has the sweet face of a young Tea Leoni but a mouth like a sailor. She and her friends like to pal around and frame corrupt cops by having Erica give them oral pleasures while filming them, then blackmailing them for money. But Erica has a goal for that money, which is to bail out his father. She also has a nice friend-type relationship with her mother (Kathryn Hahn) but that relationship goes sour when she has her boyfriend and his son move in. The son is weird – he just got out of rehab and Erica has to babysit him.

I didn’t like these characters one bit, and when they start doing bad things, I begin to like them less. But I have to admit that even as I say I do not like these characters, I am not able to take my eyes off them as the film progresses. The last part of the film made me cringe, and I thought the ending was kind of wimpy compared to the big set-up. Max Wrinkler, the director, has an eye for something, and his next film I bet will be better than this one.