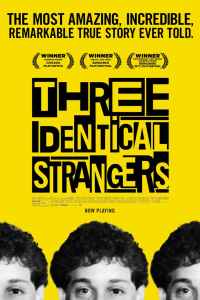 I have a friend who is a big movie lover and he has been imploring me to watch the documentary ‘Three Identical Strangers.’ He asked me if I knew anything about it, and I said that the only thing I knew about it is that it is about twins or triplets who found each other. He said, ‘Good, because the less you know about it going in, the better.’

He was right. This film is a thriller with the happy ending in the front. I was still out of the US when this story first broke out in 1980 about triplets who found each other by chance. They have been separated at birth and were reunited when one of the brothers attended found himself in the same college as the other brother. This was a feel-good story, with the ‘cute’ commentary of how they are all alike, they smoke the same cigarette brand, nature vs nurture! To capitalize on their celebrity, they even open their own restaurant in SoHo named ‘Triplets’

The film gets darker quickly, We find there’s more to them just being separated by the agency, as we find that they are part of a larger sinister scientific experiment. And the film goes into how children inherit depressive natures of their parents. I bet you will feel enraged and horrified as I was. I felt very uneasy after watching the film, and wonder how many other people out there, unaware that they have been part of this ‘experiment.’ And this makes for a real compelling watch. I have to call my friend and tell him, you were right, and thank him for the recommendation.