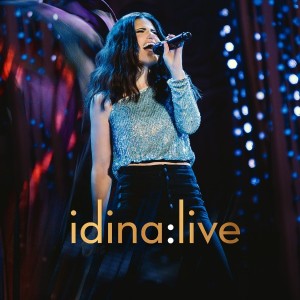 You can just guess where the state of my emotions are right now because when Idina Menzel sing the track ‘Every Time We Say Goodbye/I’ll Be Seeing You’ from her new album ‘idina:live,’ I started weeping. It’s mostly from a mixture of emotions – some tough breaks lately, missing some departed loved ones, and basically just feeling the gorgeousness of these two songs. I mean, this is not even the most imaginative medlette pairing, but something about it just got to me, and for a brief moment there all those emotions rolled up into that one track.

I wish the rest of the album stirred just as strong emotions. This is a live album from her concert tour last year, and I saw it here in Los Angeles at The Forum, a little before I realized I was moving here. In the album, Menzel is in mixed voice, but I think it is still a wonder. I know people go hot or cold over her, and I get it, as the brass in her voice could be a little too much. But I like it, and it’s unmistakably her own – you hear one note and you know i’s her. I also like the mixed repertoire here – songs from her album ‘idina,’ and songs from stage and screen mostly associated with her. I give credit to someone who can make me listen to ‘No Day But Today; without wincing.  The usual Idina standards: “Let It Go,’ ‘Defying gravity,’ ‘I’m Not Your Girl’ are all great to listen to. I remember loving the concert just fine, and she certainly knows how to hold the audience in the palm of her hands (she has star quality to the wazoo) and that chemistry with the crowd translates well in this live album. A weird personal anecdote: it looks like this recording was from the Las Vegas leg of her tour, and I was just thinking if I still lived there, I would probably have gone to this performance….