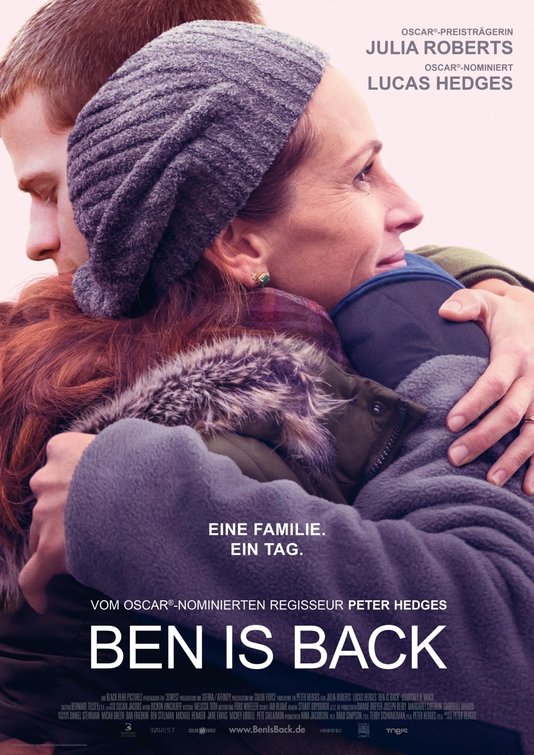 I can’t remember the last time I enjoyed a Julie Roberts performance, though I do remember the last time I enjoyed a Julia Roberts film (that would be ‘Wonder’ from last year)  But I thin she is fantastic in Peter Hedges’ Ben Is Back,’ wherein you can see Roberts go deep and try to get in a character, instead of just trying to go by and wing the performance through her trademark guffaw. In here, she plays Holly, a mother who has to deal with her son coming home from rehab to spend Christmas at home, and Roberts is great at that opening scene wherein she sees her son and her face has to show a multitude of emotions – glee with his arrival, but at the same time there’s concern and fear with what might happen. Roberts owns the film from that moment, as we experience what she goes through for twenty four hours.

There has been a couple of movies this season about white boys in peril, and this one is the one that resonated best so far from me. The film switches gears mid-way through, and that made it more interesting for me. I was on the edge of my seat as it veered towards being an almost-thriller. And I have to say that I have seen Lucas Hedges give one memorable performance after another recently and he is at his best here, and I believed him the most in this film. He and Roberts played off each other well, and their performance add heart and soul to the film. At my screening, there were people hired by the studio giving about questionnaires about the film and I thought they were very aggressive, which makes me think they don’t really know how to market this. I hope this film finds an audience. It deserves one.