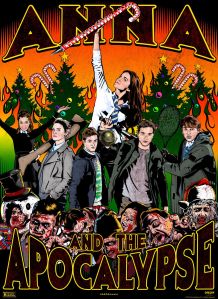 A Christmas Zombie Movie Musical? What a fun idea. That’s exactly what John McPhail’s ‘Anna and the Apocalypse is,’ wherein a teenager (Ella Hunt as Anna) is just trying to live her life, getting ready to go to Australia for her gap year, when she wakes up and find zombies have invaded her town and has started killing people. And it’s Christmas to boot. It’s a cute idea, and of course, I will pay attention because it is a musical. For me, though, it is more a great idea than a good executed one. It’s not bad, and I bet you it will get some kind of cult following (I can see young musical theater kids lapping this up) but the music here doesn’t really fit the definition of a musical. I would call this more a movie with songs, and actually the songs (by Roddy Hart and Tommy Reilly) aren’t bad, in the vein of songs-with-mostly-hook-and-no-melodies structure. And the kids sell them – Hunt and the gang give it proper conviction. I wish I connected to it more, but horror-tinged hings, even if comedic, just do not appeal to me. More power to it, though, and hope this inspires others to do more movie musicals.