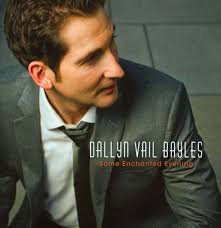 Dallyn Vail Bayles has released his third CD titled ‘Some Enchanted Evening’ and it is a collection of show tunes. His first two albums were more of the inspiritual/spiritual vein, but I see from his credits that he was an Phantom understudy in the touring company of ‘The Phantom of The Opera.’ I also read that he is very active in the Church of Latter Day Saints community.  A show tune singing Mormon? I guess there’s one for every kind. Mr. Bayles has a nice solid voice, and the repertoire is a nice mix of familiar and the not too much. But me and male voices, I just get bored. And I am scared about his church’s anti-gay stance, so perhaps I am a bit biased. But more for everyone else.