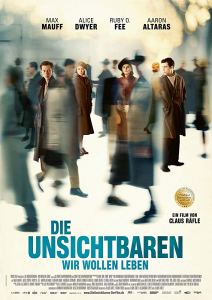 Since yesterday was Holocaust Remembrance Day, i thought it would be fitting that I saw ‘The Invisibles.’ (Die Unsichtbaren) From Germany and directed by Claus Rafle, it tells the real story of four Jewish people who were ‘left behind in Germany during World War II as they try to disappear and blend in with everyone. The film is told part documentary style, with the four narrating their stories as ‘re-enactments’ are shown. The format reminded me of those old television show wherein a televiewer would send their stories to be told and there would be dramatic scenes so the tales can be visualized. On the biog screen, it minimizes the drama. Still, I thought these stories were compelling enough to get my attention. For some reason, I am now always fascinated with these WWII stories, perhaps this is because Past couple of years, I have visited all these European cities that have been affected by the war. I sitll for the life of me cannot understand how the Nazis were able to do this, but I take a look at the United States today and basically Trump is trying to do the exact same thing. I liked this film, and I thought it was a fitting tribute to remember Holocaust Remembrance Day,