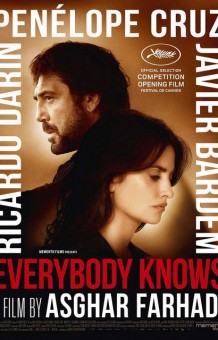 I was drawn to ‘Everybody Knows’ because of its Director, the Iranian Asghar Faradi. I liked two of his earlier work: ‘A Separation,’ and ‘The Salesman.’  This is his first film in Spanish, and I know he did a French language one before, though I have not seen it. ‘Everybody Knows’ (Spanish title: Todos Lo Saben) is a kidnapping thriller movie, but it is also, and more, a melodrama. If you came looking for an edge-of-your-seat thriller, you probably will be disappointed. I had to re-callibrate my expectations myself, but once I settled in that this is a slow-burning kind-of-sexy Spanish story, I was fine.

And it stars two of the biggest films of Spanish cinema – Penelope Cruz and Javier Bardem, and they both sizzle here. Cruz plays Laura, whose daughter gets kidnapped. I kind of knew that something was going to happen tot he daughter the way it was set up. Irene (Carla Campra) is beautiful and luminous in the early scenes you just want to tell her “you in danger gurl,” and the party scenes aren’t over yet and she is gone. The story’s focus moves into the peeling of the layers of the relationships of the people left behind, that the kidnapping at some point would hardly matter.  I thought at times that the pacing slowed, but then I got that it needed to slow so we can fully know all the other characters. I was always a little lukewarm about Cruz but she is great here, giving a pained performance that never gets to ‘too much.’ And Bardem is wonderful, an empty slate in the beginning that becomes more and more complicated as the story evolves. I know that the buzz on this was fairly negative coming out of Cannes, but I liked it enough. It probably would end up as a lesser Farhad, but a lesser Farhad is a solid effort.