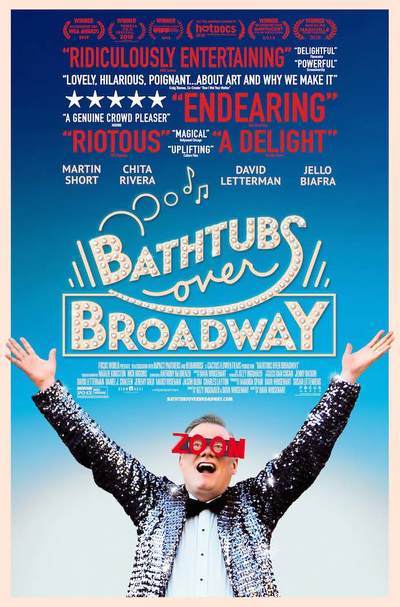 I was introduced to industrial musicals when I started collecting show music. I knew some composers did them to pa the bills, but I was mostly disinterested in them. I preferred listening to the flop shows who actually made it on Broadway. Still, it is great to see that Dava Whisenant has made a documentary partly about them. ‘Bathtubs over Broadway’ is more about Steve Young, a writer who used to work for David Letterman, and his obsession with collecting them. He has a very distinct point of view about it – basically looking for comedy where you least expect it. I would have used a different lens, probably focusing more on how composers and directors juxtaposed these shows versus the real shows they were creating (Susan Stroman touched upon that briefly during her interview) but don’t get me wrong, I found a lot of positive things in the film, it just isn’t totally for me.

I thought ‘Emo The Musical’ wasn’t for me, either, but anything with the word ‘musical’ will certainly get my attention. Neil Trifett wrote and directed the film, and peppered it with some of the most generic songs that all sound like they were too witty for their own good. I hate to even say that this film is not really a musical by its strictest definition. I was mostly bored by this, if I have to be honest and the best thing I can say about it is that it has a great message.