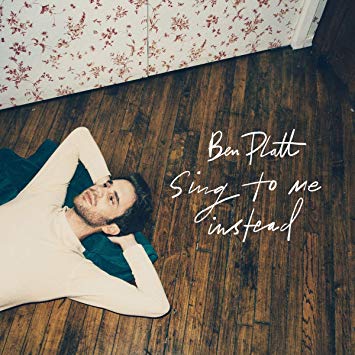 As a show, I can take ‘Dear Evan Hanson,’ even though I have problems with its score. I mean, is it just me, or does every Pasek and Paul song sound exactly the same? There’s no denying Ben Platt is great in it, though, and make the songs sound much better.  But his style is molded in that modern melisma vocal-fry style that I really at times despise.  I know Platt did a version of ‘Maria’ from West Side Story that was full of those things, and I cringed when I heard it.

So call me surprised when I that I liked his debut album, ‘Sing To Me Instead.’  First of all, his vocal style is muted. I always say, let the songs showcase your voice and it will shine on its own, no need for extraneous exercises. His songs may not much variety in style, but he expresses the emotions in them with great authenticity. They are also cohesive in message – songs about love and heartbreak that you can tell come from the same point of view, making them more personal and heartfelt. I especially like three songs best: “Grow as We Go,’ wherein he sings about maybe being apart as they grow together.  There’s also ‘Older,’ which has the wise line of ‘When you are younger, you wish you’re older, and when you’re older, you’ll wish for life to turn around.’  And of course, damn if I can’t relate to ‘Bad Habit’  wherein he just can;t seem to let go of someone, as he expresses the need for that person to be in his life.  All in all, the album is quite layered, and I bet as I listen to it even more I will be able to peel more out of it.  Much has been written about Platt ‘coming out’ via the first music video for this album. but it hardly matters nowadays. Think of him as a more localized Sam Smith, just as relateable, just as bombastic.