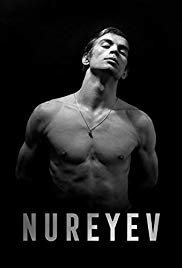 Since I saw ‘The White Crow,’ I have been a little more interested in the life of famed ballet God Rudolf Nureyev, and I know that a documentary was released to coincide with Ralph Fiennes’ film, which only tells half the story. Unfortunately, while ‘Nureyev’ fleshes out a lot of the details of Mr. Nureyev’s life after his defection, the film by Jacqui and David Morris is a mess. There’s a lot of things going on, yet it feels hollow. While it was great to see a treasure trove of snippets from Nureyev’s performances (his estate provided tapes)  the filmmakers are too in love with the subject that we fail to see a big picture.  And while we do get a huge dose of his accomplishments, there’s not a lot of texture on it as it is skimp on his personal life. Yes we know he succumbed from AIDS in 1993, but we only get a PSA of how the disease is still here, which feels generic and stale. Still, I think this is a good companion piece together with ‘The White Crow.’ But together, you still don’t get the full Rudy.