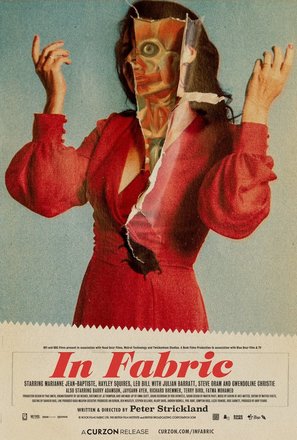 As much as I am not a big fan of horror films, there was something about ‘In Fabric’ that interested me.  It is billed as a “horror/comedy” and I had heard it had a lot of camp elements. And in the first half anyway, it kind of delivered on that front. There’s something a little charming about a haunted dress, and my favorite part of the film is Fatma Mohamed, who is an evil sales lady who recited droll dialogue to her customers: “A purchase on the horizon, a panoply of temptation, the hesitation in your voice, soon to be an echo in the recesses of the spheres of retail,” just to cite her first line in the film.

Once we get to the second part of the film, though, the movie loses steam to the point that it totally lost my interest.  And as far as scares go, this isn’t as traumatic for me, as I thought this skews more on the comedic side.