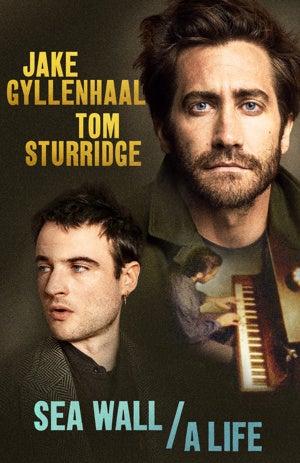 There is a viral video going around of Alan Rickman saying that basically says doing a monologue is not acting, it just shows that you can memorize. He further adds that ‘real acting’ is being in the moment, listening and reacting to other actors.  I don’t know if I will agree with that, as I have just finished watching ‘Seawall/A Life,’ playing at The Hudson Theater on Broadway. It stars Jake Gylenhaal and Tom Sturridge each doing a monologue. I thought both were very well-written, and presented fully formed characters that I felt I knew after the evening.

The first act has Sturridge playing a young British photographer. Written by Simon Stephens (he wrote The Curious Case of the Dog in the Night-Time )  Sturridge takes us from something light and funny to a darker place, and he does it effortlessly. The director, Carrie Cracknells gives this part a light touch, and when the second sad part comes, you ease into it almost unknowingly, and then you find yourself in the wallows.  Of the two monologues, it is the one that shines better.

Jake Gylenhaal’s second act piece, ‘A Life,’ has less depth, but is showier. It also benefits from Gylenhaal’s star power – boy can this guy command the stage, as he has that undeniable charisma that will make you want to look at him, and look at him more. His piece centers on a young man experiencing the circle of life, experiencing the loss of his father as well as the birth of his child. Gylenhaal gives his all, and there is that much-talked about part where he goes into the audience and makes personal connection with them. Even if you are far from that row, you will feel he touched you too.

All in all, this is the kind of theater that will feel more like an experience, as these two actors present two variations of the young males at similar points in their lives. It’s not too deep, and certainly not shallow.