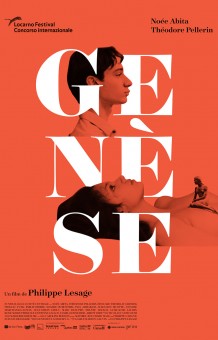 When you are young and in love, the feeling consumes you, and art can be the only avenue that can properly express and describe that feeling. Perhaps you will be able to relate to a song, or a film.  Phillippe Lessage’s ‘Genese’ tries to distill that moment in a story about two young people trying to navigate their feelings. On one side is Charlotte who in the beginning of the film is asked by her boyfriend for an open relationship. She resists the idea but meets another young man and starts going out with him, and gets to be treated badly by that guy. More complex is Gillaume’s story line. Gillaume goes to an all-male boarding school and finds himself falling for his (straight) best friend. I found myself drawn more to Gillaume’s story, as he makes stupid decisions after stupid decisions because of that attraction. One night, when he tries to kiss him, the friendship gets strained, and gets permanently damaged. Theodore Pellerin is heartbreaking as Gillaume, and he has a cringe-inducing scene wherein he starts to profess his love for his ‘friend’ in front of the class that just cut through my heart in equal parts shame and despair. How many times have we all been in a similar situation wherein we do things in am act of desperation responding to our unrequited feelings? (I raise my hand) The oddest thing about the movie is that around the last twenty minute mark, it segues to a completely unrelated third story line about characters that I find later are from an earlier film of his called ‘The Demons.’ I wonder if he had originally shot a sequel and just abandoned it and didn’t want to waste the footage so he included it here? Anyhow, we get a third of something truly fantastic here, and I am still haunted by it.