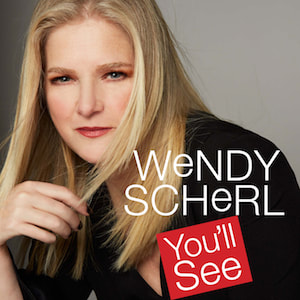 I think we now have gotten to a point wherein people are beginning to realize that ‘The Way We Were’ is a really good song. Well, because it is. I know that during the 70s it was everywhere and it got associated with a certain ‘sound,’ but in its core it’s a beautiful wistful song, one that reminds us of our ‘misty water colored memories.’ Anyway, I thought of that while listening to Wendy Scherl’s version of that song. In her new album, ‘You’ll See.’ she pairs it with another Barbra 70s song, ‘Niagara,’ and it is magnificent – together it gives one singular love message, and it brought *me* back to my youth, and I always say, isn’t it great when something – a song, a movie, a poem- does that? It is easily my favorite track from this, her wonderful album.

Elsewhere in the disc, she sings a variety of cabaret and musical theater stalwarts. I had not heard of her before, and I read she took an eighteen year break in performing to raise her children. I welcome her return, especially in tracks like Jerry Herman’s ‘Wherever He Ain’t’ and the Berlin ‘I’ve Got The Sun In The Morning.’ When she gets serious in ‘Anytime’ from “Elegies,’ you feel like she rips her heart open. After listening to the album, i realize it is on Ken Bloom’s Harbinger Records, and that makes sense, because everything in that label is superb.