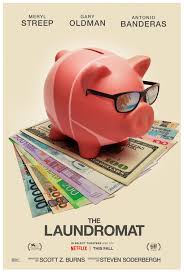 About halfway through Steven Soderbergh’s ‘The Laundromat,’  the story veers away from where it started, and you ask yourself, ‘what am I watching and where is this going.’ That’s only the beginning of how bizarre this film feels to me. We are first introduced to Ellen Martin, played by Meryl Streep in one of her ‘character’ performances, and yes, her story is interesting and relatable – a woman who gets killed in a boating mishap and then finds out the insurance that covers their boat ride has been shady. Ellen plays sleuth and tries to find out what caused this and gets drawn into the world of offshore shell companies that really are just corporation paperwork and nothing else. But the film abandons that narrative and goes into not one but two different arcs. It was trying to show us different situations about how these ‘shell companies’ are used to defraud the banking system but it felt jarring because it took us out of the narrative, and honestly, it felt like I was being taken out of the movie I was watching.

When the story comes back to Streep, it gets even weirder, and the ending baffling. I am still trying to process about that artistic choice. Streep is reliably good, and it’s great to see her along for the bizarre ride, but I kind of don’t like it when she goes into character mode, wherein she packs a lot of things with her performance – a wig, an accent, physical acting. It enhances the performance but also distracting at the same time.  Soderbergh does a good job of trying to explain how the ‘Panama Papers’ scandal worked, and I hope it inspires resistance from common folks. This film as an experience, though, baffles as much as it entertains.