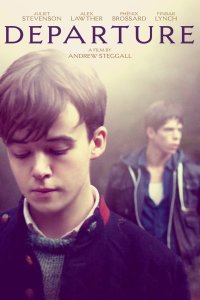 What is it about falling for the unattainable? It’e the theme as old as time that keeps on taunting us, and I have to admit there is a certain romanticism to it that I clung to when I was younger. But now that I feel that time is so precious, unrequited love just seems a waste of my time. I recently saw two movies with this theme and found myself still getting into the idea, but feel I am a lot more grounded now about reality.

In Andrew Steggal’s ‘Departure,’ that theme is a lot more forgivable, given that the story centers around fifteen year old Elliot (Alex Lawther) who goes home with this mother to their vacation house in France to pack it up as they are in the process of selling it. he meets a young boy Clement, who fascinates him, and this gives himself a clue to their sexual orientation. This languid-paced film is slow, even for me, and Juliet Stevenson who plays his mother is fantastic. All of that still cannot overcome the laziness in storytelling. This held such promise that did not deliver.

Speaking of slow, Marco Berger’s ‘The Blond One’ is glacial in pace. There is a lot of subtlety int he story that every minute, every silence, every ‘insignificant’ scene all constitute great narrative. And again, with the unattainable. This Argentine drama centers on two men who have recently become roommates. Even though Gabriel (Gaston Re) is seemingly ‘straight’ (he brings home women) he carries on a relationship with Juan (Alfonson Baron) and it becomes a no-strings-attached relationship, until it becomes not. I had a little bit of a problem with the dynamics of the relationship, but then I thought why should I when they don’t. It shows more about societal limitations in Argentina about homosexuality (or bisexuality) that men are not comfortable expressing their orientation. This is one of those movies that quietly gets you. You watch and you realize you are suddenly so affected by it.