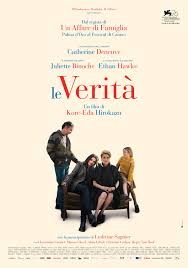 Hirokazu Kore-eda’s film won the Palme d’Or at Cannes last year and he opened the festival this year with ‘The Truth,’ his first non-Japanese film. This film is set in Paris, and the dialogue is in both French and English. Catherine Deneuve here stars as Fabienne, an old-school movie star who has just released her memoirs. At the beginning of the film, we see her daughter Lumir (Juliette Binoche) arrive with her husband and daughter to celebrate the book’s launch, but when she starts reading the book she finds out that it contains a multitudes of lies, like her father being listed as dead, and, more alarming for her, that Fabienne has painted herself as a great mother. And the film goes through how everyone deals with that. For example, Fabienne’s long-doting assistant is not even mentioned, prompting him to quit, leaving Lumir to act as one while she is vacationing. This film is more an exercise in great effortless acting. Deneuve is delicious as the self-centered Fabienne, who, like any other actress out there, has no concept of reality. And Binoche can only be described for making us all believe that she is playing a woman who turns to screenplay writing because she is a terrible actress.  We gleefully watch these two in action before we realize there isn’t much plot or story here. But for the most part, we don’t mind.