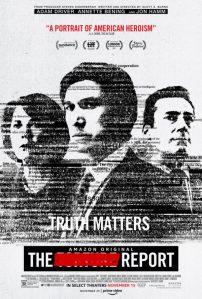 Can you find drama in an almost 7000 page report about the CIA torturing prisoners after 9/11? Director Scott Z Burns certainly tries. In his film ‘The Report,’ the details are mostly dry, and it really doesn’t make for a great film. Armed with a great cast, the actors make do, and most of them succeed in giving the film a boost of energy, but some of the material is deadly dreary. The first hour of the film is certainly a struggle to get through at times, but after that it picks up, and fueled by the great energy of Adam Driver as Daniel Jones (who is the chief investigator of the report) it picks up steam. If only the first hour could be tightened, this would be a better film. As it stands now, we can all just marvel at all the great acting, especially Driver and Annette Benning, who convincingly plays Senator Dianne Feinstein.