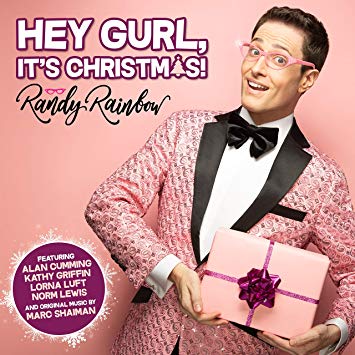 Randy Rainbow is a big hit with his political-themed parody songs, so I guess it’s a national progression for him to do a Christmas album. While yes, his YouTube videos are amusing, I think the humor is a little too obvious at times, the jokes are too easy pickings. But sure, I will listen to this Christmas album. And it is exactly what you will think a Randy Rainbow album will be. There are skits, there are political jokes, there are singing. The first two are ok to good, the last, well, let me just say his voice is not my cup of tea, as I think it is too mannered, like he has been going to a serious voice teacher all these years and has not learned to find his real voice. And you can see the influences, too. When he sings ‘Trump’s Favorite Things, for example, he segues into Julie Andrews mode, which is fine, but is it necessary? Isn’t the lyrical parody enough? Listen to his duet with Norm Lewis and you can see the difference in lyric interpretation. And while this is topical, I wonder if this will be a classic in the sense that people will still listen to it in, say, a year.