I recently saw two documentaries that had a lot of things in common, both were about historical issues in two Asian countries: China and The Philippines.

The first one is Nanfu Wang’s ‘One Child Nation,’ which centered on China’s policy from 1979 of families only being allowed to have one child. Something needed to be done then on the country’s overpopulation, so the government issued a law curbing population. Wang is herself a child of those times, so she had some personal stake in it. But she also found out the ramifications of that policy. Doctors were performing late-term abortions by the hundreds of thousands, for example. Plus, a lot of female newborns were being given away by families, but since no one wanted female children, most times these newborns were left to die at the markets. Later on, these babies ended up being old in the open market, brought to the United States for adoption in exchange for money. Some of these effects were really disturbing, and tested my squeamish factor. I thought the film was very thought provoking, and opened my eyes on an issue that I didn’t know existed. 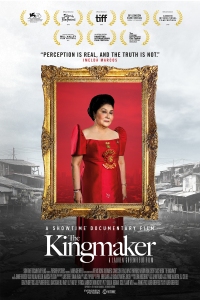 Since I am a Marcos baby, there really weren’t a lot of surprising revelations in me from watching  Lauren Greenfeld’s ‘The Kingmaker.’  Greenfeld’s pat subjects have always been the rich and their downfall, so it must have been fascinating for her to have the chance to interview Imelda Marcos – this, after all, is a woman who owns a Picaso, a Michaelangelo, and a Monet. But in the course of making the film, she found something else – that the Marcoses are slowly inching back to regain political power in the Philippines. Some people have described this as sort of a dark Cinderella Story, and it’s very apt. You can see how savvy Imelda can be, and how she can easily charm you. I have a friend who know nothing about her and left the theater utterly buying everything she was selling. Greenfeld presents a very balanced subject here, giving equal time to her opponents and detractors, and gives an impartial view of the subject. The film is quite interesting, even for me who has semi-intimate knowledge of these affairs.