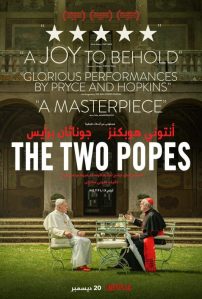 Talk about mixed feelings.  On one hand, as a film, I thoroughly enjoyed ‘The Two Popes,’  directed by Fernando Mereilles. It’s a great story – Pope Benedict and Pope Francis, played by Anthony Hopkins and Jonathan Pryce – who succeed each other. It’s a celebration of what’s great in humanity, about two people agreeing even enjoying each other’s company even if they disagree about fundamental things in life. One is a conservative who wants things to stay the same, the other wants to adapt to the changing world. It shows how we can all agree to disagree and live peacefully, and could be a great metaphor for all the political divisions in the world. It is certainly a great example of fine acting by both actors – Pryce has the meatier role and have gotten more attention but I think Hopkins more than holds his own. It certainly can make you feel good, and as someone who was raised a Catholic, it gave me a sense of pride in the Catholic faith. As a film, it sets out successfully what it was meant to do.

Its message is dangerous. It’s total fiction, and one should really read this great article in order to fully comprehend its negative impact. First of all, we need to give weight to allegations that Pope Benedict could be a Nazi sympathizer. Plus, the movie makes it seem like he is resigning to give way to more progressive leanings. The truth is probably closer tot he fact that the church, under his leadership, is guilty of several crimes, including hiding sexual assaults from Catholic priests. In this case, one might accuse the film of whitewashing these sexual harassment allegations. And of course, the two Popes talk about the church helping the poor, but at the same time the film shows us all the opulence of the church – can you imagine how much food can be bought if they sold one of their precious paintings?

So this leaves me in a dilemma – should I laud the film as effective entertainment? Or expose the impact of its untruths?