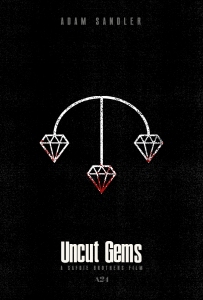 No, ‘Uncut Gems’ is not the latest film from Bel Ami. But really, I kind of wished it was. This film is the latest release from the Safdie Brothers (Josh and Benny) and stars Adam Sandler. They have become critical darlings, and I will not deny that they make films with a distinct voice and feel. But this is a film I respect more than like. Simply put, it’s a genre I don’t like – a frenetic stressful thriller that doesn’t make anyone feel good. Sandler stars as Howard Ratner, a jeweler in New York City’s diamond district. Ratner is also a gambler, who is betting on basketball games, even as he over extends himself by borrowing from various people. There’s a lot of things going on here for him – he has a family, and a mistress, and he juggles them along with everything else going on. The film moves from scene to scene in great frenetic energy, and just trying to keep up alone took a lot from me. I am sure for someone who is a basketball sports fan there is a lot more texture to be felt here, but for me, it just felt like I needed to take more blood pressure medication. Sandler has been getting fantastic notices here, and he is great in being able to juggle everything thrown at him. I still feel it did not have as much depth, but maybe that is just my projection.