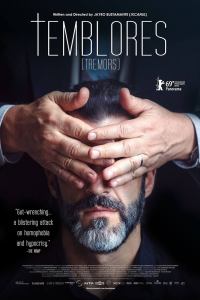 Jayro Bustamante’s ‘Temblores’ (Tremors) is set in modern day Guatemala, but it feels like this  could have been the 18th century.  Pablo (Juan Pablo Olyslager) wants to leave his family for another man and in the beginning of the film he comes home finding out that this has been revealed to his family and they are confronting him. He reacts by curling up in a blanket, as an earthquake happens, causing everyone to think it’s God sign that this sin must be repented. The rest of the film deals with the aftermath. He leaves for his lover, and as a result, he loses his job and visitation rights. I am sure these situations still happen in Guatemala, and it is nice to see the stories told, but as a viewing experience I thought it was pretty bleak. I couldn’t feel any kind of joy in the film, even as Pablo, in the beginning, tries to liberate himself from the constraints of his family and religious beliefs. And the ending is a downer of all downers, so the whole experience felt very dark – not the best movie to watch int he Christmas season.