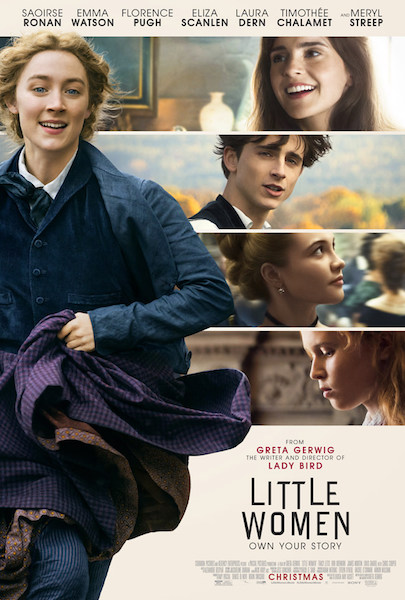 Greta Gerwig’s ‘Little Women’ is the perfect Christmas movie. It bristles, it makes you wonder, it makes you think, it entertains.  But then again, i feel like the ultimate target market for the film, as it seems like I have been seeing its trailer from all the movies I have sen since September. I was a bit skeptical at first – do we need another film adaptation of this? – but the only way I can describe this film is that Gerwig has ‘remixed’ the material. It’s still the same great story by Louis May Alcott, but it somehow feel urgent, current, and modern.

Maybe it’s the performances. Saoirse Ronan is at the core of this, and she gives us a great Jo March – relatable, strong willed, a woman of today set in the 1800s – who values her art in her own tomboyish feminine way. She broke my heart towards the end when she sees the consequence of turning away Laurie. On paper, I could say that I am not too fond of Amy, but Florence Pugh here gives us depth that for maybe the first time I understood the character much more. The rest of the cast is great – Emma Watson, Eliza Scanlen, Lara Dern – and Meryl Streep steals the scene in every that she is on. I also think we should give Timothee Chalamet props – he holds his own here as Laurie against all the girls, and he is swoon worthy with his high cheekbones. As Amy Pascal noted, ‘he has the most beautiful face on screen since Elizabeth Taylor.’  This film made me feel good, and I can’t think of a better Christmas present.