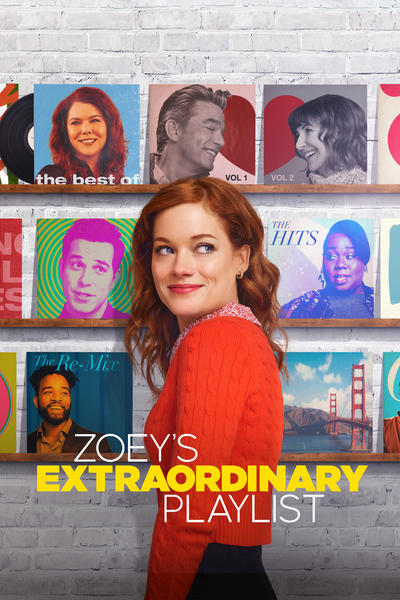 I started watching the new show and I couldn’t concentrate because I couldn’t figure out where I have seen Jane Levy before (she is the star of this new series) and I had to stop and google her. Of course, she was in that ABC show Suborgatory, which I used to watch. When I finally realized that, I settled now and tried to enjoy ‘Zoey’s Extraordinary Playlist.’

What piqued my interest is that this is a show with music, and has been described as similar to ‘Glww,’ and ‘Crazy Ex-Girlfriend,’ two shows I have enjoyed in varying degrees. It even has int he cast alumnus of both shows – Alex Newell from the former and Skylar Astin from the latter (though, really, I knew Astin from Broadway’s ‘Spring Awakening’)

I have to admit that in the beginning, the ‘concept’ of the series was a little hard to grasp. Because of an incident involving MRI and an earthquake, the main character, Zoey, is able to hear people’s thoughts (akin to ‘What Women Want’) but the twist? She hears them through songs conveyed by those feelings. Sometimes it works wonderfully and other times it baffles. So, say, when she sees her work crush one night, she hears him singing Tears for Fears ‘Mad World,’ and the premise kind of works. But when random street people start doing a production number of ‘Help,’ the concept is a bit forced, for the sake of the musical number anyway.

There’s also a heavier side to the show – Zoey’s father is suffering from some debilitating diseases (Progressive Supranuclear Palsy) and is unable to talk, so when she reads his mind later on via a song, the effect is poignant. The father is played by Peter Gallagher, and at first I thought, this is such a thankless role, but then Gallagher got a musical number later, so I am thinking maybe not? I mean, why would one accept a role where you are basically just a vegetable. Lauren Graham plays Zoey’s mother and she has good chemistry with Levy.

In the end, I am on the fence. I don’t know if this will really work, and it will all depend on how they use the ‘gimmick’ for future episodes, but I will happily support shows wth music, and this show holds much promise.