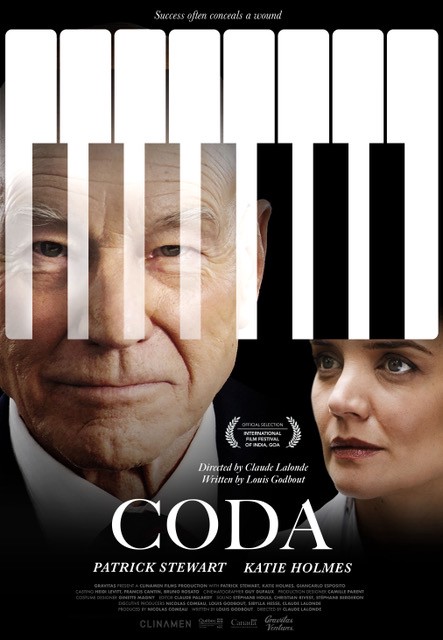 In Claude Lalonde’s ‘Coda,’ Patrick Stewart plays Henry, a famous pianist who, late in his career, suffers stage fright. This probably stems from a traumatic experience he had in his personal life. He meets a female music critic, Helen, played by Katie Holmes who helps him not only snap out of that, but also assists him in sorting out his personal life. The film is a rumination of things we experience as we age, and it is one of those small films that is just…well, small. I thought it started well, but stalled after the first hour. After the two meet, the audience gets lost in where they (and the film wants to go.  Stewart is quite strong here, as he is able to flesh out a real character we can relate with – someone who is at a loss later in his life, and struggles to find meaning in all of it. Holmes’ Helen is a bit underwritten, as she only serves as a conduit to where Henry wants to go. But she is fine with whatever she is given, as she is able to make a mark in the film. I was eventually unsatisfied with the film – it dragged towards the end and even though the film had some beautiful music and fantastic locations (I rediscovered my love for Beethoven Sonatas)  those weren’t enough to keep me fully vested,