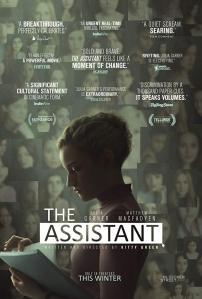 Kitty Green’s ‘The Assistant’ is a quiet film.  The beginning part of it can be slow and tedious (and seemingly pointless, even) as we watch Jane go through the motions of preparing the office for her boss, a powerful film executive. She sets the coffee machine, tidies up his office, prints her agenda. We see this somewhat as a voyeur, waiting for something to happen, but really not much does. We understand just by watching her how her day feels – redundant, exhaustive. But as the day comes along, we see the intricacies of her job. While we never see her boss, we feel him constantly, whether when his wife calls looking for him, or when Jane picks up used syringes from his table to put in red plastic toxic bags.  Let’s be frank – this story is firmly based on the #metoo movement, and the offices are much too close to be Miramax that to deny it would be futile.

The latter half of the film is powerful. We see, more subtly than explicitly, all the horrific actions this executive does. A young woman flies from Utah to be a new assistant and is billeted at The Mark where said executive meets her, another young lady shows up at the office for a ‘meeting’ in the middle of the day, and yet another one is there in the evening. Everyone turns a blind eye, and it becomes all too overwhelming for Jane. Two months into the job, she goes to the connecting building for Human Resources, and that scene is for the books. You’ve been there, you go to HR and you know that they will never be on your side, they only care about the company. Julia Garner as Jane plows through the whole move with intensity, you feel every emotion her character does. I think it works that she is a mostly unknown actress – to have cast this with a bigger name would have been distracting tot the character. The movie feels so real it almost feels like a documentary, and I am even sure the truth is even stranger than what we have here. This film will hit you at the core.