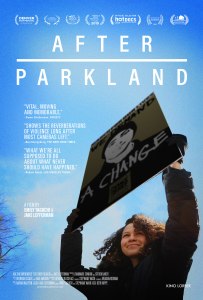 To most, Vlentine’s Day is a day for flowers, chocolates, and romantic dates. But to some people, it is a remembrance of a horrible day – when in 2018 a gunman shot young men and women at Marjory Stoneman Douglas High School in Parkland, Florida. Can you imagine that feeling? In Jake Lefferman and Emily Taguchi’s ‘After Parkland,’ we how some people most affected by the tragedy deal with it just soon after, and how the incident inspired them to try to make a change.

It’s devastating. I found myself sobbing in various parts of the film, and sometimes it was a little too hard to take. There is focus on two fathers – Andrew Pollack,  who lost his young daughter Meadow, and Manuel Oliver,  who lost his basketball playing son Joaquin. The two have different approach to change – Pollack tries to get new safety legislation approved and even goes to meet Trump and Betsy Devoes in Washington, with both looking bored while speaking to him. Oliver works as a Creative Director, and uses his son’s image for an organization he started, ‘Change The Ref,’ which opts to get rid of the lawmakers who are complacent to the broken system we have,

The film also focuses on David Hogg, who rose to fame via March for Our Lives, and has been ridiculed by the Republican Party because of it. We see him take a gap year before going to Harvard just to he can galvanize his cause of getting the youth to register to vote.

The film is quite powerful, and if it doesn’t inspire you to do something about the world we are living in, then I don’t know what else can.