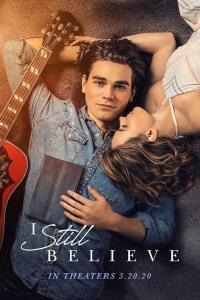 Listen, I try to steer clear of religious movies, not because I dislike them, but I just think they are propaganda. I wouldn’t judge you if you saw them, and more power to filmmakers who want to express their art through them, but, it’s just not for me. But with movie theaters closed, I said sure why not see ‘I Still Believe’ ? I mean, at the very least, I will be watching yummylicious KJ Apa, right?

Well, it was kind of a waste of time (but we have time nowadays) I had to stop rolling my eyes at times not because of the corny faith-based dialogue (I knew I would get those) but from the common storytelling techniques. Every trope you can think of is used here, and it seems to borrow elements from ‘The faults In Our Stars,’ and the last ‘A Star Is Born.’  Apa plays Jeremy Camp, and this is based on this personal story. In the beginning if the film, he is off to college, and about half hour into the movie, he is filling stadiums. I know this is not supposed to be a biopic, but a little context would have been helpful. Then this was supposed to be a love story (okay) but really it is a cancer one, as shortly after Jeremy marries Melissa (Britt Robertson) she is sick. It’s all those things at the same time, at a whooping almost two hour long (did nit need to be this long?)  I should have been lapping up this kind of movie, but found myself so bored by it – not to be totally shallow but, couldn’t they have given Apa’s fans a shirtless scene? You must have a whole ton of faith to like this, but for everyone else it will be a religious chore.