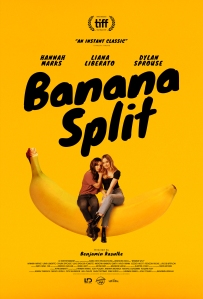 So I am not gonna lie. I wanted to see ‘Banana Split’ because of Dylan Sprouse. I mean, he is a cutie. I remember this was on the roster of the Los Angeles Film festival and it was such a hot ticket (because of Dylan Sprouse, I heard) and I had been awaiting its release since then. And now that I  have seen it. I can say that this is a great movie – but not because of Dylan Sprouse. To be honest, he is the third lead here, and quite frankly, his role could have been played by any other young actor and it would not have made a difference.

A lot of people have compared this movie to ‘Lady Bird’ and I see why – it’s a story of a young woman graduating from High School and in the course of the summer before her Freshmen year finds a little bit more about herself. Hannah Marks stars and wrote this film based on her own experience. This film is also about women friendship, which in a lot of cases is a lot stronger than most romantic relationships. Think of this as a started Oprah-Gayle story. I think there are some lesbian undertones too, but I am not an expert on that. But Marks gives a great performance here, along with Liana Liberato, who plays Clara. I found myself thoroughly enjoying this film, and that is note even the Quarantine speaking.