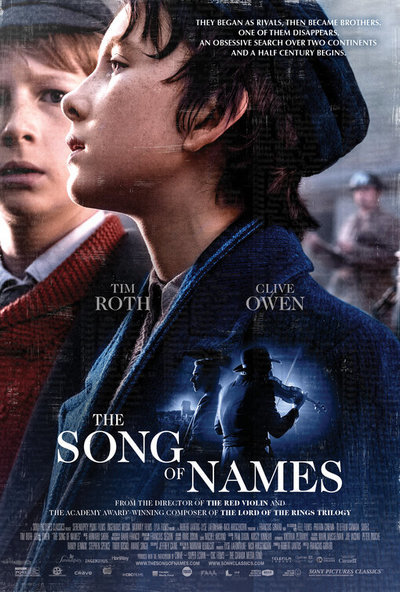 There are a lot of things about Francois Girard’s ‘The Song of Names’ that appeal to me: the historical drama theme, the classical music, the Britishness of it. The story, based on Norman Lebrecht’s novel, and with screenplay by Jeffrey Caine is weaved intricately – a young violinist, on the night of his big concert, suddenly disappears on the same night, and we are there to piece everything together, moving both backwards and forward. But the heart of the film is set in the mid 80s, when Martin (played by Tim Roth) gets a clue on what happened that night to his friend Dovidl (Clive Owens) and pursues the latter’s whereabouts.

The film doesn’t really work in a lot of ways, buy for me, it sill works.  As a thriller, it is tepid, and the direction is much too low key for it to be really suspenseful. But there’s a quiet dignity to the whole thing, and Roth plays the role with expert subtlety. When the ‘big reveal’ is finally narrated, it isn’t as bombastic as you thought it would be, but it still packs intensity. And the music is breathtaking (Ray Chen plays the violin) and gives the film layers, along with Howard’s Shore’s score. I have family members who make fun of my film choices, saying I love ‘talkies.’ This film probably best describes what they mean, and I would gladly wear my admiration for it.