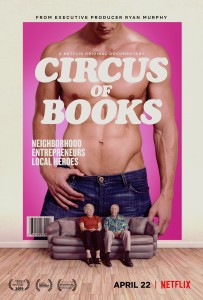 But there’s a deep personal story to the documentary as well. When their kids were growing up, they were very tight-lipped about the business, as they didn’t want to be a distraction for their kids growing up. Karen is pretty religious, and that dichotomy is explored here as well. They are a very sensitive couple, and some of the most touching scenes are when Barry would take about friends and colleagues that passed during the AIDS epidemic. And wouldn’t you know it, but they also have two queer children, and we see Karen go through hardship in accepting them, to being proud PFLAG members.

In a lot of ways, the book store is a perfect backdrop for how gay life has changed over the years, and with the internet moving content to online, there was no choice but to eventually close the store – we see the bittersweet ending at the end of the documentary. There is a silver lining, though – Chi Chi Laroue has rented the space and transformed it to ChiChi’s Circus, now a gallery/store space, still for queer content.