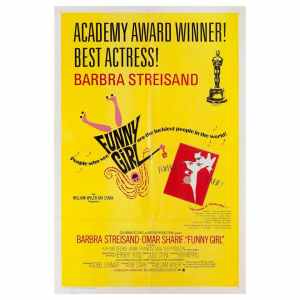 It has been a very long time since I last saw ‘Funny Girl.’ I remember when I first saw it – I was a youngling and was voraciously devouring ‘old’ Streisand – I was spending time at the New York City Public Library and reading everything in their archives about her. I was a high school student in the 80s and I was trying to ‘catch up’ on things I have missed (I wasn’t even a year old when the film originally came out) I remember being awed by the film, and by her – but curiously, only viewed film then only once – I was trying to cram in as much as I can, listening to Original Cast Recordings, watching movie musicals. I do remember seeing this on the big screen, at the Film Forum in New York around the mid 90s at some kind of retrospective, and I think I went because I wanted to experience the movie at an actual movie theater. So here I am, around 25 years after that. Much has happened to my life since then, and I would also like to think my taste has evolved. Will I still love the film as much?

And the answer is yes, I do. There’s something about the material that still gets to me, after all of these years – the ugly duckling getting her prince, the way you can love someone so much you lose yourself in it, in him – these themes could be stories of my past life. As a middle aged man, I don’t know if I could still relate whole-heartedly. I would like to think I am much wiser now, and can look at Fanny Brice with some objectivity. I get you girl, but move on, he’s never gonna change. Or perhaps the harsher message: he’s really just not into you as much as you are, and he will probably never.

Streisand still commands the role, and maybe in our lifetime we will never see anyone else play Fanny Brice as effectively. This time around, I confess to embracing the film’s limitations: the second act can never match the brilliance of the first, and the film is totally bloated – I wonder if it could have worked as well (if not better) if the whole piece was more intimate. And there’s that part of me now that maybe would have wanted the retention of “The Music That Makes Me Dance.”  Still, I can count in one hand films I have a total emotional connection, with, and this is one of them. Maybe in ten years I will watch it again and see if I feel differently. I suspect not.