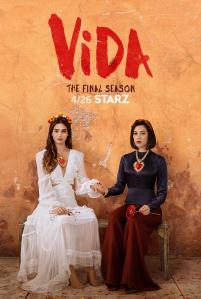 I had been looking forward to the third (and supposedly last) season of Vida. I have been with these girls from the very start, and want to continue with them on their journey. As the third season starts, we see both Emma and Lyn very… happy. Lyn is enjoying seeing a good review of Vida the bar, and Emma and Nico has been having a ‘finger fiesta.’ (Lyn’s exact words, which I thought was hilarious) But you know that there is drama around the corner, because as we learned from last season, their father is very much alive, and that is looming over everything – I suspect that will be a major story line this season.

But we aren’t there yet – their happiness seems to be sustaining even if things are coming their way. For Emma, it’s the appearance of Zoe at the bar – she is Nico’s ex and is acting like a fool. The old Emma would have made a big stink of that, but this new one is even-keeled and I like it. Lyn is still going hot and heavy with Rudy – he even invites her to a party to meet his mother, where Lyn gets to meet people who don’t think she is Mexican enough. Again, this is the new and more mature Lyn, and after a conversation with a waiter, realizes she just need to fight on. I don’t think that is the end of it, though, as I feel Rudy’s mom is up to something.

This happy set up is, of course, going to be upended. And I can’t wait for the season to rumble.