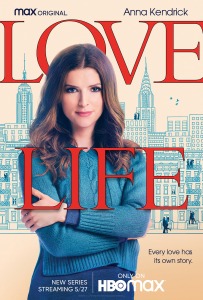 ‘Love Life’ is the one show on HBO Max I had been looking forward to seeing, since it’s a romantic series – you know me, hopeless and hopeful. It is billed as an ‘anthology’ and I was wondering if it was similar to Amazon’s ‘Modern Love’ which I loved.

The show follows one character, Darby, as she looks for love in New York City, and the anthology part comes in because each episode centers on a ‘relationship,’ and the definition is broad – a one night stand, dating, long-term relationships. It has a ‘Sex and The City’ vibe, and take that however you want.

And I have just seen the first three episodes, and I love it already. First of all, Anna kendrick is wonderful – slightly bitter, slightly acerbic, hopeful, vulnerable, funny. I am not too convinced when she becomes too ‘sexual,’ but maybe that’s just my projection. In the first three episodes alone, the show has shown range in the story – the first centers on a relationship with Auggie that lasted, and had you hoping for both to stay together. The second is a little ick – she starts dating her old boss – and it felt like when one of your friends starts dating someone you know is just wrong for them. I liked the third one, wherein she has  a one-night stand and the guy gets clingy and she unintentionally breaks his heart. The show is instantly bingeable, and i wish they had released all the episodes instead of just sets of threes. I am in, let me fall in love!

P.S. I am making a prediction – in the end she will be with Auggie.