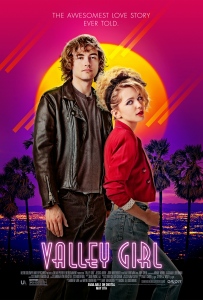 I wonder how this new Valley Girl came about. I mean, what was the pitch – Let’s remake an iconic rom-com, and make it a jukebox musical? I was not the biggest fan of the original film, and to be honest I don’t even remember it all that well. I know it’s a Romeo and Juliet type of story between a girl from the San Fernando Valley and a punk guy from Hollywood. I also remember Nic Cage starring and it was the film that made him a star. But will this new Valley Girl movie make me remember more, or forget?

To be honest, this film isn’t the worst thing in the world. It’s pretty fun, if you don’t take it seriously. I mean, they could have done more than regurgitate a random Spotify 80s playlist, but it kind of works for that their purpose. The songs and dance numbers are adequate, if instantly forgettable. Some songs are shoehorned a little too obviously, but whatever. I could even say that a song or two, ‘I Melt With You,’ and ‘Girls Just Wanna Have Fun’ were repurposed very well. The cast is fine, although I don’t know if they will follow the Nic Cage trajectory,. One of them, Jake Paul, is loathsome, and even though he plays the villain, he has the effect of making your skin crawl even moire. In some ways, I wish this film made me hate (or like) it more. As is, it’s just okay.